The Development and Evolution of American Rail

The Development and Evolution of American Rail

The Evolution of American Rails – For more than 170 years, trains have run on a defined gauge, which is the distance between the two inner sides of the rail head. In the early days of opening to traffic, each railway company had its own gauge, which brought about the problem of impassability between two different gauges. Today’s standard gauge is 56.5 inches in the United States. The cross-sectional shape of the rail is “T”, which is composed of a rail head, a rail waist, and a rail bottom. The rail head and the train wheel contact and support the train, and the rail bottom is fixed on the sleepers to transfer weight to the ground. . This shape has not changed much in more than 150 years. Decades later, as locomotives and trains carried more weight, the size of the rails for this structure changed accordingly. The “T” rail in the United States determines the type of rail according to the number of pounds per yard. The light rail is 60 pounds/yard (equivalent to 30kg/m), and the medium-sized rail is 110lb/yd and 115lb/yd (55kg/m and 57.5 kg/m), Class I heavy rail is 132lb/yd and 141lb/yd (66kg/m and 70.5lb/m). In North America, companies that use Class I heavy rail include CSX, NorfoldSouthern, Pacific Union, BurlingtonNorthern Santa Fe, Kansa CitySouthern, Canadian national, and CanadianPacific.

The early rails were made of wood, and later a layer of steel plate was wrapped on the rail head, but this kind of rail has a limited lifespan and poses a threat to driving safety. In the middle of the 19th century, wrought iron was used to make rails, but the material was too soft and the quality could not be effectively guaranteed. For example, in the early days of railroad construction in 1832, see Figure 6, rails made of wrought iron were used, and rails were laid on stone on the Camden Amboy railroad line in New Jersey. When locomotives and trains have more and more axle loads, long-life safety rails are really needed, so steel rails have come out. The rails were replaced by steel rails. At that time, the production volume in the United States was very small and had to be imported from the United Kingdom. The cost was very high, so at that time the steel rails did not really replace the rails until the British Henry Bessemer developed a famous steelmaking process in 1855. In fact, American William Kelly claimed that he discovered this process in 1851. The fierce dispute over the invention patent continued for many years. process patents. However, Henry Besemer was a successful businessman who managed to obtain a license for the process technology to enter the market, so everyone called this process technology the Bessemer converter. The molten iron from the blast furnace is mixed into the pear-shaped container, and the air enters the molten pool from the bottom through the tuyeres to oxidize and remove harmful impurities in the molten iron, making it smelted into steel. 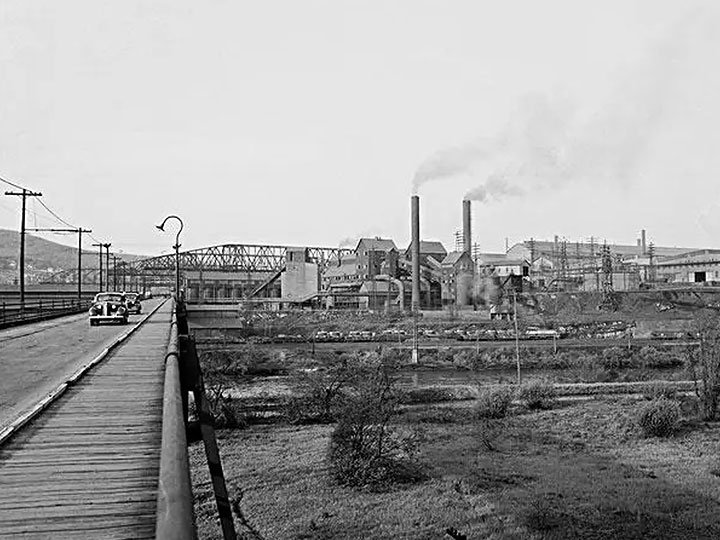 The first real production of steel rails in the United States was in May 1867 at the Bessemer converter at the Pennsylvania Steel Works, which did not have a rolling mill ready to roll the rails, so the cast ingots are sent to the Cambria Steel Works in Johnstown for rolling into rails. A year later, the construction of the rolling mill was completed, and the steel mill was completed from smelting to rolling in one go. The Pennsylvania Railway Company gave financial support to ensure the rapid expansion of its railway network. By 1883, the Pennsylvania Steel Works had become a major steel company,

The quality problems of Bessemer converter production still existed. In 1861, German-born engineer KorlWilhelm Siemens invented a new steelmaking furnace called Siemens’s new generation steelmaking furnace. Siemens and Frenchman Pierre-Emile Martin produced crude steel in 1865 with what is known as an open hearth steelmaking furnace, thereby solving the main quality problem in the Bessemer process. Although it takes several hours to smelt a furnace of steel in the open hearth furnace, the capacity of the open hearth furnace is large, the general steel output is 100-130 tons (up to 400 tons), and the product quality is excellent, which is better than the Bessemer converter. The open hearth furnace can conveniently control the smelting process, and carry out periodic sampling and analysis, the amount of alloy added is reasonable, and the composition of molten steel is accurately controlled. Phosphorus can be removed in alkaline slag (eg by adding lime). Pennsylvania Steel Works began installing open hearth furnaces in the early 1880s and ceased all Bessemer converter production in 1914.

By the 1960s, with the development of a basic oxygen furnace (BOF) and beyond the open hearth. Today, in the United States, the output of EAF steel exceeds that of BOF, and two long-term rail steel mills (ArceloMitttal Steelton and Evey North America Pueblo, Colo) both use green and environmentally friendly electric furnaces to eat scrap steel to produce rail steel.